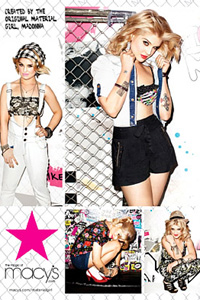 Kelly Osbourne shows she has the style and the look to be the face of Madonna’s Material Girl clothing line. Her first ad, which will debut in Vogue magazine, shows Osbourne flashing a colorful bra, paired with black shorts and a white cropped jacket.

The line was designed by Madonna and her 14-year-old daughter Lourdes.

“Kelly represents a true Material Girl,” Madonna said. “She is edgy, cool and has a unique sense of style that Lola and I love.”

“It’s such an honor to be a part of this campaign and it was an amazing experience to work with Madonna and Lola,” said Osbourne, who replaced Taylor Momsen as the face of Madonna’s clothing line. “Material Girl is incredible because it’s high fashion but it’s also accessible to anyone who shops at Macy’s.”

After her Dancing With the Stars gig and dramatic weight loss, Osbourne has made a career out of fashion, as she is now the Fashion Police co-host on E! and Madonna’s new BFF.

“I take so much of my style from Madonna in the 80s and I really admire how Lola dresses and that she stays true to herself,” said Osbourne.

Tell us: Who do you like as the face of Madonna’s clothing line? Kelly Osbourne or Taylor Momsen?