Lindsay Lohan is refusing a plea deal in her necklace theft case because she refuses to go to jail for something she says she didn’t do. 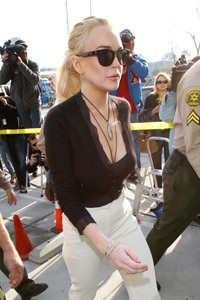 Lindsay Lohan is refusing to accept a plea deal in the affair of the necklace after a judge made it clear that any such deal would include jail time.

“I don’t want you to be a repeat offender in the system,” the judge said. “I want you to get on with your life and reach whatever potential you have. Quit causing your family additional stress.”

Lindsay is adamant about the fact that she didn’t steal and refuses to go to jail for something she says she didn’t do.

Lohan, who managed to wear pants today, is due back in court on March 10. If she stands trial and is found guilty on the felony grand theft charges, she could be facing a full year in state prison, plus added time for violating probation — which could total three years.