Lindsay Lohan is back in a Los Angeles court this morning to discuss a possible plea deal for the necklace she allegedly stole. Is she headed to the big house? 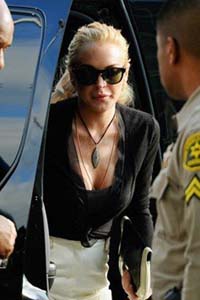 Lindsay Lohan is back on familiar territory this morning: She’s back in an L.A. court to discuss a possible plea deal for her felony grand theft charge, according to TMZ. Lohan arrived at the L.A. court earlier this morning wearing a demure skirt-and-sweater combo — an outfit much less scandalous than her recent body-hugging court wear.

Presiding judge Keith L. Schwartz reportedly told Lohan that she will go to jail if she accepts a plea bargain, according to TMZ.

“I don’t care that you’re Lindsay Lohan,” he reportedly said.

A plea bargain would help Lohan avoid a trial and a possible long jail term for the felony charge. However, it also shows that Lohan violated her probation, meaning she would still go to jail for a significant period of time.

The plea deal reportedly includes three years of felony probation — and she could get one year in jail if she violates it.

TMZ reports that Lohan doesn’t want to take the deal — if that happens, she’ll face trial and be back in court March 10.

Stay tuned to SheKnows for more on this developing story.