Christina Applegate told Ellen DeGeneres that the birth of her daughter was 18 hours of “profound pain.” 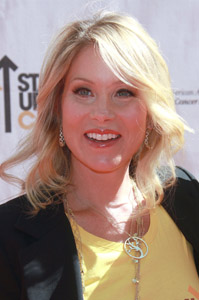 In her first broadcast interview since the birth, Applegate told Ellen DeGeneres that her labor “was about 18 hours.” She added, “I had my plan. Plans are a big joke, you know, [mine] was to have an epidural but I didn’t react to it well.”

“It was profound. It was profound pain. And then that happens (pointing to photo of daughter). Just that moment, pulling her out and I dropped my gown which I don’t do. This part of my body (her chest) is very private to me.”

The actress had a double mastectomy after suffering from breast cancer in 2008 and discovering she carries the BRCA1 mutation. While she is now cancer-free, her breasts remain a source of uncomfortable introspection.

“That’s a real private place. A place that I don’t have a good relationship with, let’s say. But at that moment of pulling her out and I just tore that thing [gown] off. There’s a room full of people that I don’t know. Nurses and doctors. And she and I just laid there. It was the best thing that’s ever happened to me.”