Lindsay Lohan is preparing herself for two big days this week: Her court dates, which could decide her fate for the next three years. 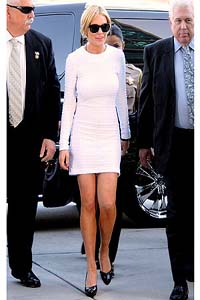 Lindsay Lohan will face a judge twice this week and could walk out of court a free woman or wind up in jail for three years.

On February 23, Lohan must fight for her freedom against felony grand theft charges after a Venice, California jeweler accused her of stealing a $2,500 necklace. Lohan’s excuse is that she had a verbal agreement to borrow the piece.

On Friday, Lindsay will meet her archnemesis, Judge Elden Fox, for a probation hearing which probably would have gone really, really well without those pesky felony charges. Despite the little altercation at the end of her stay at The Betty, Judge Fox probably would have found her in full compliance with the terms of her probation.

Felony theft charges throw a bit of a monkey wrench into that scenario.

Even without a conviction yet, Judge Fox could order Lohan to jail for merely being slapped with the charge in the first place. If convicted of the theft, she could face three years in the slammer.

However, Dina Lohan thinks it will all blow over (codependent much?). “Once we get through tomorrow, hopefully Lindsay can put this all behind her,” Dina told E! News. “She’s really serious about practicing what she learned at Betty Ford.”