Last night, Lifetime aired Amanda Knox: Murder on Trial in Italy, starring Hayden Panettiere. Producers are saying they portrayed the story accurately, but will this movie affect the ongoing case and appeal?

The trial of American student Amanda Knox, accused of the murder of Meredith Kercher in Italy, has been a hot topic since 2007. The story has it all — love, sex, murder and betrayal — so it was only a matter of time until it was made into a movie.

Lifetime aired the movie, Amanda Knox: Murder on Trial in Italy starring Heroes actress Hayden Panettiere as Knox, on February 21. Knox is currently serving a 26-year sentence in Italy for the murder and has appealed her conviction, with a jury to reconvene on March 12. 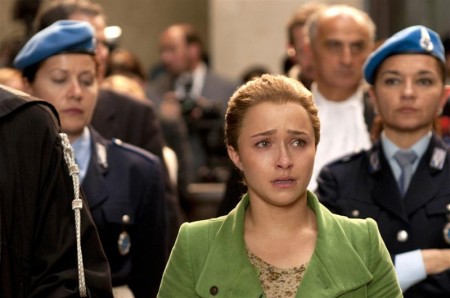 Lifetime is getting heat over the movie because they billed it as “based on a true story,” however, Knox’s family does not see it that way — and they are undoubtedly unhappy with the timing of the movie and her upcoming appeal.

The family released a statement today saying Lifetime has “a selfish, profit-making motive behind their decision. The story they have told is riddled with a multitude of inaccuracies and we are deeply upset at its airing.”

The family of murdered teen Meredith Kercher is also speaking out about the movie, calling it “inopportune and inappropriate.” Knox’s ex-boyfriend, who is also accused of the murder, is upset with Lifetime as well.

Executive producer Trevor Walton told Hollywood Today that he feels they portrayed both sides of the story accurately. “I think we were very, very careful not to be partial in the way that we told the story. Amanda Knox is facing two situations. One is a slander case, and then the appeal. But what our story does is tell, factually, what happened up to the point of her arrest. So we feel that we’ve done this very responsibly and should have no affect whatsoever on any ongoing trial.”

What does Panettiere think of the controversy — and does she think Knox, whom she portrays in the movie, is guilty? “You know, it’s one of those stories, which is why it’s so compelling and why I was so interested in playing it. It’s one of those really riveting stories where you just don’t know. And I mean, we spent five weeks, and I’m not just telling you this just to say this, genuinely spent five weeks every day talking about it and reading about it and looking at new evidence — trying to form some sort of opinion about it. And it’s like she’s innocent; she’s guilty; she’s innocent; she’s guilty; she’s innocent. I can’t say that I have an opinion, and that’s why the story is so interesting — the facts and what people said, and the changes in stories. It really all comes together to form this incredible story that I think people are really genuinely interested and curious in. And I don’t know that we’ll ever really know.”

Marcia Gay Harden, who plays Knox’s mother in the movie, defends Lifetime’s decision to air the movie. “Lifetime is extraordinarily specific about checking their facts, and if there was some discrepancy in the script, it would go right back to the proper sources to make sure everything that was said was fact based.”

Tell us: Do you think the movie will affect Knox’s upcoming appeal?