The Bachelor embarked on four very different hometown dates this week, including a trip to the crematorium. 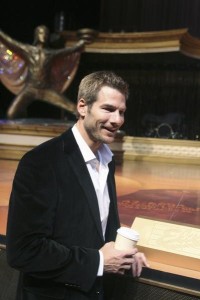 Brad Womack was down to four lucky girls this week on The Bachelor and everyone knows what that means — hometown date time. Brad Womack traveled to the hometowns of Emily, Chantal, Shawntel and Ashley in hopes of getting closer to the season finale proposal we all hope to see.

First up was a trip to Seattle to meet Chantal’s family. Chantal is obviously very close to her family seeing as how she lives down the street from them. She needs their approval more than anything. The two spent the day hanging out and getting to know her dog, Bocca. As the evening progressed, Chantal introduced Brad to her mom and dad. The normal heartfelt fatherly concern was shared. Brad assured her father he wants to be there for whoever he chooses. Her mother just wants the best for Chantal. Brad leaves feeling like he sees a future with Chantal and wants to be a part of her family. The viewers are left wondering how this is any different from other Bachelor hometown dates. There wasn’t that much chemistry.

Next up for Brad Womack was a trip to Maine to meet Ashley’s family. Ashley gave him a lesson in French because there are tons of French Acadians in Maine and it’s a common language in that area. It was a cute contrast from the normal homey-atmosphere we saw in Chantal’s date.

Brad seemed to feel a real connection with Ashley’s small-town life. The next step was meeting her mom and dad over a family dinner. Both of Ashley’s parents felt a connection between the two. Whether it’s real love, time will tell. Ashley’s enthusiasm and zest for life are a concern presented by her family. It leaves him wondering if he can actually go toe-to-toe with her or if he’ll wind up holding her back. The family offers to put him up for the night, and while he declines, you can see he didn’t want to go.

We’ve been hearing that Brad Womack’s hometown date with Shawntel in Chico, California might be weird and it kind of was. She brought him to the mausoleum where she works. Okay, we give her credit for wanting him to see her life and part of that is working with dead people. He acknowledged that this will be a huge focal point of their relationship if they stick together. Turns out, Brad was fascinated by her tour of the crematorium.

After all the death talk, it was time for Brad to meet her parents. After meeting with her dad and hearing how vital Shawntel is to the family business, it made him realize how important her life in Chico is — yet his life is in Austin. Will this make a difference? Regardless, she declared her love for him.

Brad’s date with Emily in Charlotte, North Carolina was probably the most emotional. Emily was reunited with her daughter Rikki who was, of course, introduced to Brad. Brad presented Rikki with a kite she could fly in the park where they’d be spending the day. Brad used the kite to eventually connect with an obviously shy Rikki. Emily admitted she can see Brad in both of their lives.

The three moved the party to Emily’s house where they all played and had fun until Rikki fell asleep. Emily wanted to get more romantic but Brad felt awkward with Rikki there. The two debated over being intimate and eventually wound up in a sweet kiss at the front door.

Brad handed out his first two roses to Ashley and Emily, which we kind of expected. Chantal and Shawntel both had great dates but Chantal’s was too standard and almost formulated while Shawntel seemed to have the weight of her family on her shoulders. In the end, Brad let Shawntel go to live out her dreams in Chico, California.

The final three on The Bachelor have been chosen — Emily, Chantal and Ashley. Who do you think Brad Womack will choose?