Justin Bieber has a new hairdo — and we have the photos! 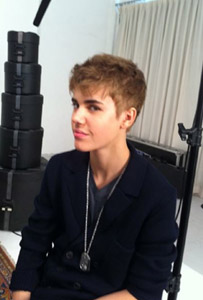 Justin Bieber’s famous locks got switched up this week when the teen sensation cut his hair way shorter than it’s ever been!

Bieber hinted at a change to come when he sent this tweet to fans: “thinking about getting a haircut….hmmmmmm.”

The celebrity All-Star game MVP later showed up on the set of TMZ Live with his new, much shorter ‘do.

Bieber’s regular stylist trimmed his formerly shaggy mane for him earlier in the day on the set of the video for a song he recorded with Rascal Flatts. The Biebs simply said he “wanted to change it up.”

Not one to miss an opportunity to do good, Justin made sure the hair that was cut was collected and will be handed out to various charities to auction off. TMZ says they plan to use theirs to raise money for animal charities.

What do you think of Justin Bieber’s new hairstyle: Is his ‘do a do or a don’t?