A Jersey Shore cast member recently got engaged in a very public way — but is the whole thing nothing more than a publicity stunt? 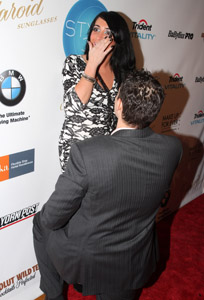 Jersey Shore alumnus Angelina Pivarnick got engaged on the red carpet of a New York Fashion Week event, but a source close to her new fiance Dave Kovacs says the whole thing is nothing more than a publicity stunt.

The insider told RadarOnline that Kovacs believes Angelina will be invited back into the Jersey Shore fold and when she is, he will join her. In the meantime, Angelina is seeing another man!

“Angelina is also seeing this guy Ivan, a firefighter from Staten Island,” said the source. “The day she got engaged to Dave, she put photos of herself and Ivan together on her Twitter with their shirts pulled up leaning up against each other in his bedroom.”

“They aren’t even friends on Facebook. The whole thing is weird.”

The source also says that Kovacs had a panic attack after the red carpet proposal and later texted a friend saying Angelina is “a bad evil person.”

In addition to planning her fake wedding during her fake engagement, Angelina is busy filming her first feature film role in Every Time I Go To Staten Island Something Bad Happens.