Lindsay Lohan and Samantha Ronson are sparking rumors that the two have rekindled their romance after Ronson tweeted about their time together. 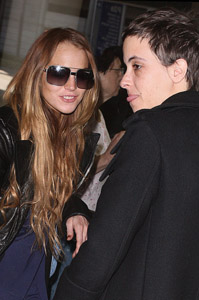 When Lindsay Lohan moved right next door to Samantha Ronson, the DJ didn’t seem too thrilled. But Lilo seems to have turned that frown upside down and the pair is now spending so much time together that rumors are swirling they’ve rekindled their romance.

First Lindsay was caught sneaking out of Samantha’s pad and into her own on Valentine’s Day. Then she was spotted meeting Ronson at the Roosevelt — also spurring rumors of broken sobriety — and the two left together in Ronson’s car, even though Lindsay had driven herself there.

“Watching Grey’s Anatomy-my fav show- @lindsaylohan sleeping next 2 me- should i wake her up to let her know her mom is going on GMA? #why?” Ronson wrote.

By the way, about that broken sobriety rumor? Lindsay addressed that herself on Twitter.

“The reports i was at teddys are inaccurate…I was just at roosevelt to meet Samantha and say happy birthday to a friend,” she wrote.

“I take my sobriety seriously. please dont believe this accusations. i know the rules and i wouldnt risk probation. xoxo L”