There is one person that is not surprised with Charlie Sheen’s recent out-of-control behavior — his ex-wife Denise Richards.

Denise Richards made an appearance on Friday’s The View to open up about her ex-husband, Charlie Sheen, and how she’s trying to raise her daughters amid all the publicity. 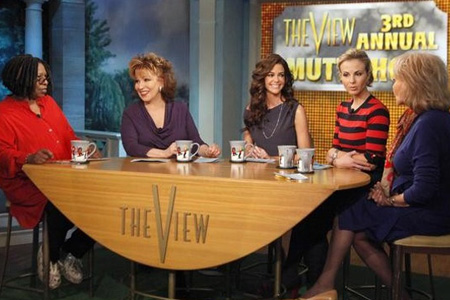 Richards and Sheen were married for four years and have two daughters together, Sam and Lola. They divorced in 2006.

“This has been something I have dealt with for years. This is not a new situation. There are times where his life is more colorful than others, more public than others, and as the kids get older it’s a difficult thing. I’m learning as I go too,” she said.

She admits that talking with her kids about his addiction will be tough, especially as they get older. “I have never had to deal with this and this was a subject I had hoped to talk with my children about as they got older. But it’s hard. There are images and pictures that a child can understand. I don’t know what they fully comprehend from these conversations. They don’t know what some of these things are. So I do the best I can and it’s not easy.”

After being pressed for more on Sheen, Richards said The View should “have him on the show and get into the details of what’s going on.”

Read on for more about Charlie Sheen & Denise richards