Britney Spears has finally debuted her anticipated music video for her hit song, Hold It Against Me. Watch Spears’ latest video and tell us what you think! 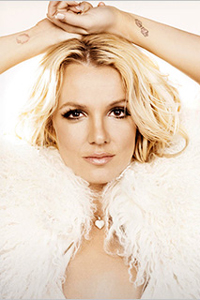 Britney Spears finally released her Hold It Against Me music video on MTV. What should you expect? Plenty of flash, fun dance moves, close-ups of Britney — and product placement.

Her marketing people made sure her new fragrance had plenty of screen time before the video and even in the video. Another strange product placement in the video was the dating site Plentyoffish.com. I kept waiting for her to pull out a Happy Meal and a bottle of Proactiv!

Britney looks great, wearing a variety of costumes including a princess-style wedding dress, silver panties and a bra-top, and was seen rolling around on a paint-splattered canvas. There is also a scene in which Britney battles her dual self in one of those slow-motion fighting scenes.

A lot happens in this video — and I was kind of hoping to see more of Spears dancing, but you can’t deny the song is fun and energetic.

Britney tweeted yesterday, “Without further adieu, I present my video for Hold It Against Me, directed by the wonderful Jonas Akerlund. Hope you guys love it as much as I do. If you didn’t I’ll kung fu kick you like I did to that chick in the video.”

Watch Hold It Against Me and weigh in!