Lady Gaga’s single Born This Way has been out barely a week, and already it’s being tackled on YouTube by Maria Aragon, brilliantly we might add. 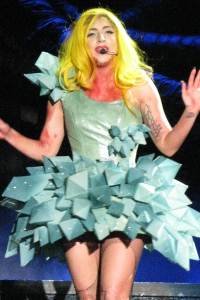 Ten-year-old Maria Aragon uploaded a video of herself performing a stellar version of the new Lady Gaga smash, Born This Way — and Gaga couldn’t be more moved.

Access Hollywood’s Billy Bush talked with Aragon on Thursday via phone and she said, “I feel overwhelmed and excited.”

Twenty-four hours after Maria Aragon posted the fabulous video of herself performing Born This Way, Grammy-winner Lady Gaga was able to view it. Gaga immediately tweeted the video to her fans with a statement: “Can’t stop crying watching this. This is why I make music. She is the future.”

By Thursday night, Maria Aragon’s video had 452,000 views and according to her, she had just made it the night before. “I don’t really know what time I put it on YouTube but Lady Gaga tweeted it at like, seven in the morning or earlier,” she gushed.

She told Billy Bush that her sisters and dad made her aware that Lady Gaga had tweeted the video. “If you could say something to Lady Gaga right now…what would you say to her?” Bush asked her.

“I just want to say, um, that she writes good songs. She has good meaning to her songs and that I really do idolize her,” Aragon said.

Although the two haven’t formally met, Lady Gaga commented to Access Hollywood while in New York. “That’s what I’ve been most surprised about, is the younger generation stood up when I put this song out. It really, the record spoke for itself. It reached a lot of people. It’s much bigger than me.”

Maria Aragon does Born This Way