Alex Pettyfer has got his Tom Cruise in Top Gun moment in I Am Number Four. It is a coming out party for the English actor as he shines in the role he was born to play as Number Four/John. I Am Number Four has had an interesting journey to the screen. In Hollywood, as in life, timing is everything.

Dianna Agron, who is enjoying her own stratospheric career moment with her turn on Ryan Murphy’s Glee, stars as the love interest/motivation spark for Alex Pettyfer. Flipped star Callan McAuliffe plays Sam and adds youthful exuberance that is reflected in Pettyfer and Agron’s performances. 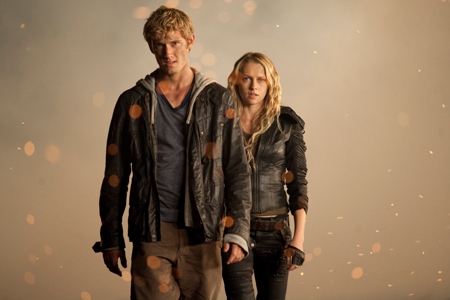 I Am Number Four was conceived as a book and a film and entrusted to author Pittacus Lore.

I Am Number Four fires on all cylinders

All involved have weaved a thrilling story.

The film and book begin in a remote jungle. Two figures sleep nervously in hammocks as a noise is heard outside. One of the men approaches the door as chaos ensues. The other man leaps out of a nearby window and begins a journey through the jungle showcasing his uncanny abilities to run, jump and seemingly do whatever he wants with his body.

Quickly, those that are attacking catch up. As he meets his fate, the audience is whipped away to the Florida Keys as a seemingly happy high schooler rides jet skis across the water with his friends. As they swim in, the reality of what is happening to Alex Pettyfer becomes painfully and dangerously clear. The Mog, the people who invaded his planet when he was just a baby, has tracked down the first three children from the planet who are blessed with supernatural powers to protect and ensure their race’s extinction.

Pettyfer is less a teenage boy suddenly as he is Number Four, the next in a series of methodical killings whose finality involves the complete annihilation of a people.

It is because of the Stephen King meets Ray Bradbury type feel to the book’s story that the film grabs the audience from the opening sequence through the final breathtaking moments.

As Pettyfer escapes the approaching killers, he is led by a protector sent along with the nine babies when they rocketed off a destroyed planet. Thankfully for audiences everywhere, Number Four’s mentor is portrayed by the amazing Timothy Olyphant. His Henri is equally intense, eternally inquisitive and always committed to giving everything in order to ensure Number Four lives and continues his people’s survival.

DJ Caruso (Disturbia) directs and keeps a steady hand over the layout of the story, the special effects and the power of his actors. Above all, he knows when to pull his punches and when to pull back for the emotion to envelop the audience, so by the thrilling conclusion of I Am Number Four, the audience is left wanting more of the eternal story of personal survival and cheering for what they have just witnessed.

As we mentioned earlier, Dianna Agron shows another layer of her talent in I Am Number Four. It is through her eyes that in the film’s final act the audience is brought into the intense life and death of what is going on onscreen. Agron and Pettyfer’s chemistry is electric.

Teresa Palmer is Number Six. The Sorcerer’s Apprentice actress turns in a killer performance as a compatriot of Number Four. She cannot be killed unless Number Four and Number Five are destroyed. As such, Palmer brings a fierceness that matches the swirling effects around her.

And then there’s Pettyfer. We cannot imagine this film without him. With Beastly (which we recently screened) arriving next month and the actor in the lead — this is his time. Thanks to his stirring turn in I Am Number Four, mark this moment: A star is born.

I Am Number Four review

I Am Number Four trailer