The woman with whom Mel Gibson is currently embroiled in a custody battle turned down a $16 million settlement offer hoping to get more cash. 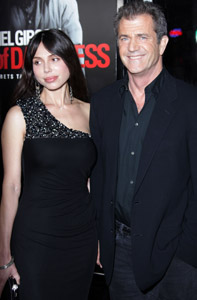 Oksana Grigorieva wanted $20 million to keep quiet about the secret tapes revealing her baby daddy Mel Gibson to be a complete psycho, but says as the mother of his child she deserves no less.

When Mel and Oksana shacked up together in 2009, he had her sign a contract saying she was “not entitled to any of the actor’s fortune under the terms of a 2009 cohabitation agreement that said she would get only a year’s free rent in a Sherman Oaks home Gibson owned and a Dodge Charger if they split,” according to the LA Times.

After Lucia was born and Mel went cuckoo again, Oksana got herself a lawyer and asked for a $20 million settlement. Mel counter-offered $18; the couple eventually agreed to $16 million, including joint custody of Lucia, money for both mother and daughter and a Steinway piano — a special gift to Oksana, a classical pianist.

Negotiations fell apart when Oksana wouldn’t give up the tapes, according to sources.

“You don’t call. You don’t accept my invitation to come. You hand tapes around & jeopardize us all,” Mel texted on the day of the proposed $18 million settlement.

“I wouldn’t have played ur messages if u were keeping ur word,” Oksana responded.

The Los Angeles DA’s office is deciding whether or not to bring up Oksana on extortion charges. Mel faces charges of domestic violence for allegedly hitting Oksana last year.