The breakup of Pete Wentz and Ashlee Simpson has been a long time coming, says a pal — and was caused by a vicious cycle of absenteeism and partying. 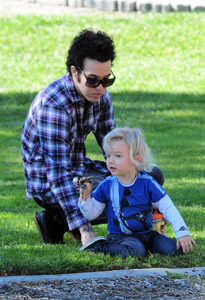 A source close to Ashlee Simpson and Pete Wentz told Us Weekly that the pair “have been talking about splitting up forever.”

The insider says Pete was barely ever home to spend time with Ashlee and the couple’s now two-year-old son Bronx. As the marriage started to fizzle, Ashlee started to take out her frustrations by partying.

“Ashlee has been out late partying for the past few months,” said a source, adding that the young mom hangs out with a crew of pro skateboarders and often wouldn’t get home until sunrise.

“She would lose track of time.”

Pete was not amused by these shenanigans. The source says the rocker “started getting burnt out” by Ashlee’s erratic behavior and while he was on the road he “would constantly check in on Ashlee, and he’d have his friends call the house and her cell to make sure she said she was where she said she was going to be.”

Wentz, normally prolific on Twitter, hasn’t updated since right before the couple announced their split.

read on for more ashlee simpson