Rod Stewart and wife Penny Lancaster welcomed the couple’s second child on Wednesday. Read on to find out what challenges they overcame to bring their new child into the world.

Legendary rocker Rod Stewart is a father again — at 66! Stewart and his wife, Penny Lancaster, welcomed a son on Wednesday, February 16. 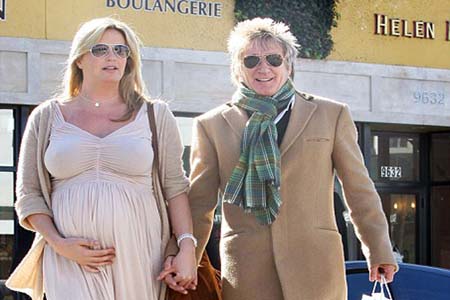 “Mother and baby are healthy and blissfully happy,” a rep for the couple told People.

Aiden Stewart is the second child with Lancaster. The couple’s other son, Alastair Wallace Stewart, is five.

“We were thrilled and delighted to be able to tell Alastair that he was going to be a big brother,” Lancaster told People in August.

Baby Aiden is a miracle child for Stewart and Lancaster — she underwent several challenging IVF treatments in order to conceive.

“I love fish and I thought that it was healthy without understanding the high mercury levels that fish like tuna, swordfish and halibut can contain,” Lancaster, told Hello! magazine in 2010. “My doctor said it was unhealthy to have so much mercury in my body, and also for conceiving babies.”

But the third IVF treatment was a success.

“I called Rod when I was still sobbing. Rod said, ‘I’m in the middle of a restaurant in Russia, crying,'” Lancaster said.

“IVF can be stressful, especially for the woman with all the hormone injections and procedures. When the first attempt didn’t work, I said, ‘Don’t worry, we’ll just keep trying,'” Stewart added.