The Westminster Dog Show made history this week by naming a Scottish deerhound as the Grand Champion. What’s next for the now-famous dog?

The 2011 Westminster Dog Show is in the books — and it was the first time this breed won the coveted Grand Champion prize. 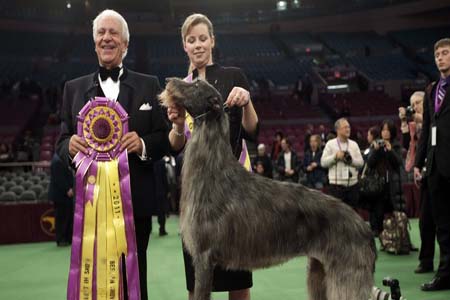 Hickory, a 5-year-old Scottish deerhound, beat out over 2,500 other dogs for the award. Hickory — full name GCH Foxcliffe Hickory Wind — is only the fourth Scottish deerhound to win the hound category in the 80-plus years of competition.

So what happens next for Hickory?

He’s now retired from show after his Westminster Dog Show win — besides, how can you top that? His owners say they’ll return to Virginia before embarking on a publicity tour with Hickory. Then, of course, they’ll work to breed him.

The Westminster Dog Show didn’t go off without a hitch, though. PETA protested outside of New York City’s Madison Square Garden with signs that read “Breeders Kill Shelter Dogs’ Chances.” This isn’t the first time PETA has protested at the show — and it likely won’t be the last.

What do you think of Hickory’s win at the 2011 Westminster Dog Show? Did another dog deserve the prize?