Christina Applegate introduced her newborn daughter to the world! Newborn Sadie Grace strikes a pose with Christina Applegate on the cover of the latest issue of People. The cancer-survivor mom says her new bundle has brought a sense of healing. 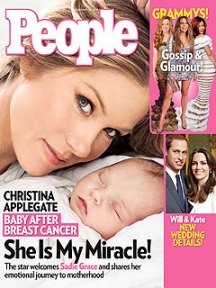 “I felt my heart literally open up for the first time and wrap itself around her. It was profound,” Applegate told People. “And I’m more in love with her every minute of the day.”

Applegate, who had a double mastectomy to fight breast cancer back in 2008, was more than ready to focus on something — or someone — more positive.

Now, instead of fighting the fight and talking the talk, the Anchorman star, 39, is busy playing mom, with baby daddy LeNoble, 41, by her side.

“Sometimes I stand there going, ‘I’m not doing any of this right!’ And then I get this big man belch out of her and I go, ‘Ah, we accomplished this together.'”

SheKnows sends congratulations to the new parents and a big welcome to little Sadie!