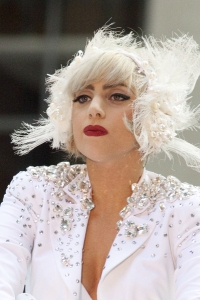 After just five days on the radio and three days with online retailers, Lady Gaga is making sales history with her new anthem, Born This Way. The single broke into the Billboard charts in the number one spot and, thanks to the luck of timing, Born This Way is the 1000th song to take the lead spot in 52 years.

“It is a tremendous honor,” Gaga told Billboard. “To be the 1000th number one on Billboard, I would be silly not to say this is the greatest honor of my career.”

“I am so humbled and so honored and overwhelmed by the reception to Born This Way,” Gaga adds. “[It] has been so life changing for me as an artist, and between Billboard and the international number ones and the radio numbers…I couldn’t be more blessed to have the fans that I have.”

Born This Way is also the nineteenth track to debut at number one in Hot 100’s history, and beat out Janet Jackson’s 2001 hit All for You for the biggest Radio Songs opening by coming in at six, with a first-week audience of 78.5 million.

Born This Way is the first single and title track from Lady Gaga’s third album, due May 23.