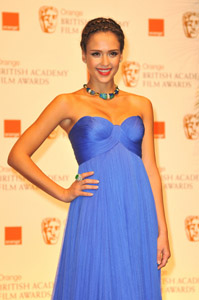 Actress Jessica Alba is going to be a mom two times over: The star is expecting her second child with husband Cash Warren.

“Tweeples — Wanted to share some exciting news… It’s been a while since I’ve been on FB & I thought I’d drop by to let you all in on some exciting news. Honor is going to be a Big Sister! Cash and I are thrilled and wanted to share the news directly with you so you didn’t hear about it somewhere else. I appreciated all of the love and support you all gave me during my first pregnancy and will definitely appreciate it again this time around. Have a great day! Jess”

Jessica, 29, and Cash, son of actor Michael Warren, already have one adorable little tot, daughter Honor Marie. The couple has been married since 2008, shortly before Honor’s birth.

Look for Jessica in the upcoming flick Spy Kids 4: All the Time in the World.

read on for more jessica alba