Rihanna is being sued by David LaChapelle, a famed photographer, who says she ripped off his art for her S&M video! 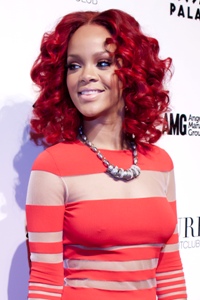 Acclaimed photographer David LaChapelle is suing Rihanna, saying the star ripped off several of his copyrighted works of art to create her controversial video for the song S&M.

LaChapelle, who in addition to still photography has also directed music videos for Jennifer Lopez, Britney Spears and Christina Aguilera, normally charges $1 million for such services — but says Rihanna willfully went around him to hire someone who would directly reproduce his work for far less cash.

In fact, an examination of scenes from the video reveals scenes nearly identical to images created by LaChapelle.

The smoking gun? LaChapelle says “the storyboards used for the music video consisted of or contained prints of the LaChapelle works or other LaChapelle photographs.”

The photographer says that as a musician, Rihanna should understand that ripping off someone else’s work is totally uncool.

“This is not personal, strictly business,” LaChapelle said. “Musicians commonly pay to sample music or use someone’s beats and there should be no difference when ‘sampling’ artist’s visuals. I really like Riri — we’ve actually worked together before. I think about her every time I’m caught in the rain without my umbrella.”

The artist is seeking $4 million in damages plus costs associated with the lawsuit.