Justin Bieber walked away from this year’s Grammy Awards empty-handed but it didn’t stop him from nabbing the Brit Award for Best International Breakthrough Artist! 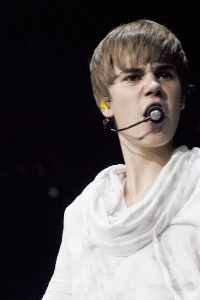 With the wink of an eye and toss of the hair, Justin Bieber can make girls melt. His angel-like voice has made him music’s golden boy, while his life story narrowly missed making him number one at the box office.

Despite all the current success, Justin Bieber wasn’t able to nab the Best New Artist Grammy. The Brit Awards found a way to put a metaphorical band-aid over the teen’s wound by presenting him with the award for Best International Breakthrough Act.

Justin Bieber beat out the cast of Glee and Grammy-winner Bruno Mars to take home the Best International Breakthrough Act prize at Tuesday’s Brit Awards. This has to make the pop star feel pretty loved. After all, his Grammy shutout had to hurt a little bit.

Other big winners at the Brit Awards included Rihanna for Best International Female Artist. The Love the Way You Lie singer also turned heads in a rotating wardrobe that consisted of a scorching red mini.

Do you think Justin Bieber’s Brit Award makes up for his Grammy loss or will he be known for the Grammy that got away? Grammy or no Grammy, the kid is a true talent.