After a heated argument with his girlfriend on Friday, Frankie Muniz said that police were wrong in saying he was suicidal. 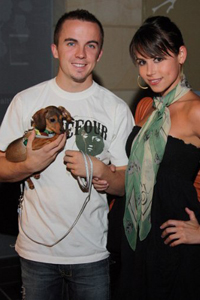 Police were called to the home of former Malcolm in the Middle star Frankie Muniz on Friday. Muniz, 25, and his girlfriend Elycia Turnbow were reportedly fighting over prior relationships.

The police report states that Muniz “grabbed a gun and held it to his head, possibly with the intent of committing suicide,” as well as “punched” his girlfriend and “threw her into a wall.”

The loaded gun that was inside the home has been impounded, and the couple has been told they will go to jail if another dispute happens. They were both charged with disorderly conduct.

Muniz’s rep made a statement to UsMagazine.com, saying:

“Frankie and Elycia had an argument a few days ago. The police were called to the residence. A gun played no part in the argument and was voluntarily given to the police for safekeeping. There were no bruises and neither left the residence. He was not suicidal. She was not assaulted. They have been together since the incident; are still together and are moving forward with their lives and with their relationship.”