America has watched with eyebrows arched as Miley Cyrus explodes into womanhood. Billy Ray Cyrus, who has also been watching from the outside of late, reveals his heartbreak and blames Disney hit Hannah Montana for destroying his family, in the new issue of GQ. 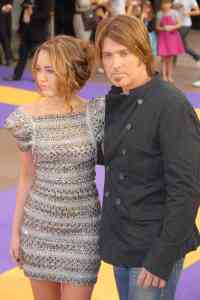 The magazine’s “Mr. Hannah Montana’s Achy Broken Heart” feature interview was conducted just after Miley’s 18th birthday bong video incident and paints Billy Ray Cyrus as a heartbroken father sitting in the dark worrying about his daughter, her handlers and where he went wrong.

“I’m scared for her,” Billy Ray Cyrus said of Miley Cyrus. “She’s got a lot of people around her that’s putting her in a great deal of danger. I know she’s 18, but I still feel like as her daddy, I’d like to try to help, take care of her just a little bit, to at least get her out of danger. I want to get her sheltered from the storm, stop the insanity just for a minute. When you go through what she’s been through, it takes a beating on you. And there comes a point where you just got to step back.”

For Billy Ray, who filed for divorce from Miley’s mother, Tish, and is facing a delay in his big comeback, stepping back has meant leaving Los Angeles for his home in Tennessee, but the distance can’t keep him from worrying.

Unfortunately, he said Miley’s handlers are keeping him out. During the recent lost cell phone and sexy photo scandal, for example, there was apparently some behind the scenes scrambling. Billy Ray tried to step in to find out what exactly was going on and help, only to be told by Miley’s handlers that it wasn’t his business.

“I’m dealing with somebody that had only known my daughter for possibly four years and I’m her daddy,” he said. “I was pretty damn insulted. And I took that as the ultimate alarm. ‘It’s none of your business!’ None of my business that you’re out running around L.A. trying to buy kids’ computers and phones because there’s something about my daughter…?”

“I’ve never made a dime off of Miley. You got a lot of people [who] have made percentages off of her. I’m proud to say to this day I’ve never made one commissioned dollar or dime off of my daughter,” Billy Ray insists. “I was working for peanuts [on Hannah Montana]. I’m not the smartest man in the world, but I know the difference. I went from $12,000 a week to, after four years and the millions that they make, $15,000 a week. Hell, yeah.”

The trouble with Hannah Montana 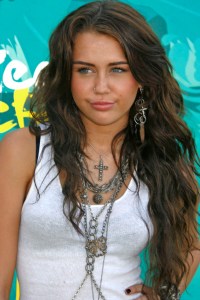 While Billy Ray signed on to the Hannah Montana series for his daughter’s good, he sees the Disney hit as the root of his family’s problems. He told GQ that after two years of Hannah Montana, he felt the biz was driving a wedge between him and his daughter, but he also admits he may have fallen short.
“How many interviews did I give and say, ‘You know what’s important between me and Miley is I try to be a friend to my kids?'” he recounted to GQ. “Sometimes I would even read other parents might say, ‘You don’t need to be a friend, you need to be a parent.’ Well, I’m the first guy to say to them right now: You were right. I should have been a better parent. I should have said, ‘Enough is enough — it’s getting dangerous and somebody’s going to get hurt.’ I should have, but I didn’t. Honestly, I didn’t know the ball was out of bounds until it was way up in the stands somewhere.”

Billy Ray also admits that before he was boxed out of Miley’s life, he let her handlers use him as a scapegoat when things went amuck for his daughter. “Every time something happened in Miley’s career, every time the train went off the track, if you will — Vanity Fair, pole-dancing, whatever scandal it was — her people, or as they say in today’s news, her handlers, every time they’d put me… ‘Somebody’s shooting at Miley! Put the old man up there!’ Well, I took it, because I’m her daddy, and that’s what daddies do. ‘Okay, nail me to the cross, I’ll take it…'”

Billy Ray ultimately realized he had to stop taking the bullets but it was too little too late. “Season four, it was a disaster,” he says. “I was going to work every single day knowing that my family had fallen apart, but yet I had to sit in front of that camera. I look back and I go, ‘How did I ever make it through that?’ I must be a better actor than I thought.”

The final episode of Hannah Montana aired January 16, 2011, and as Miley continues to spiral, Billy Ray can’t help but look back on his friendship with Kurt Cobain, as well as the untimely deaths of Michael Jackson and Anna Nicole Smith.

“Kurt was one of those guys. That’s why I’m concerned about Miley,” he said. “I think that his world was just spinning so fast and he had so many people around him that didn’t help him. Like Anna Nicole Smith — you could see that train wreck coming. I was actually trying to reach out to Anna Nicole Smith, because I kept telling Tish and everybody around me, going, ‘This is a disaster.'”

A religious man, Billy Ray believes his family is caught in the age old battle against Satan. “There’s no doubt about it,” he said. “There has always been a battle between good and evil. Always will be. You think, ‘This is a chance to make family entertainment, bring families together…’ and look what it’s turned into.”

While he admits Hannah Montana may have done good for other families, Billy Ray believes, “It destroyed my family. I’ll tell you right now — the damn show destroyed my family. I hate to say it, but yes, I do (wish the show never even happened). I’d take it back in a second. For my family to be here and just be everybody okay, safe and sound and happy and normal, would have been fantastic. Heck, yeah. I’d erase it all in a second if I could.”

The full Billy Ray Cyrus interview is in GQ, on stands now.