Lady Gaga spoke to Jay Leno about the controversy surrounding Born This Way and its throwback to Madonna’s Express Yourself. Keep looking for controversy, haters, because Madonna has no problem with Gaga’s new anthem.

Straight from her exhausting Grammy Awards night where she snagged a few trophies, Lady Gaga stopped by to chat with Jay Leno — and bring him some M&Ms. Among other things, the two talked about Madonna’s feelings towards Lady Gaga’s new song, Born This Way. 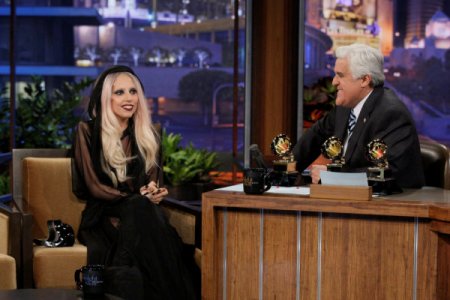 Released on February 11, Born This Way started raising eyebrows over its similarity to Madonna’s hit Express Yourself. On Monday night’s episode of The Tonight Show, Jay Leno asked Gaga if Madonna had reached out to her over the shade some people were throwing. The good news is there won’t be any Gaga versus Madonna feuds anytime soon.

“The good news is I got an email from her people and her, sending their love and complete support on behalf of the single,” Lady Gaga revealed to Jay Leno. “If the queen says it shall be, then it shall be.”

Gaga, in the past and as of today, has gushed over her own admiration for Madonna both as a fan and as a professional. Express Yourself was the 1980s and Born This Way is the now of individual anthems. There will always be a hint of past inspiration in lots of songs.

Lady Gaga also shared details with Jay Leno about a brand new project she’s working on with HBO. She’s going to be taping an HBO special of the Monster Ball tour.

Now that Madonna is fine with Lady Gaga’s new single Born This Way, do you think we’ll all move on and put our paws up to the song?