Lady Gaga arrived on the red carpet of the 2011 Grammy Awards in a giant egg carried by supermodels. What was she wearing when she hatched?

Lady Gaga took her look from meat (in case you missed it, the infamous meat dress) to dairy, as she was carried by supermodels onto the 2011 Grammy Awards red carpet in a giant egg. 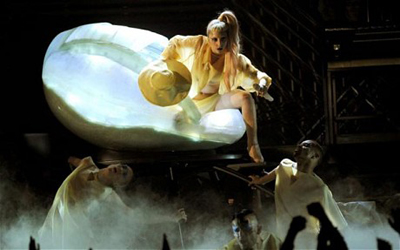 “Gaga is in incubation,” her stylist, Nicola Formichetti, said on Twitter.

“Tonight’s performance is in collaboration with Hussein Chalayan and House of Mugler.”

As her egg and supermodel nurse Laurieann Gibson was being interviewed, Gaga waved from inside the egg wearing sunglasses and black gloves.

Her nurse said that Gaga is in a “creative embryonic stage and won’t be born until her performance this evening.”

In fact, Gaga had been in the egg for a “serious amount of time” to show “how committed she was to her performance.” 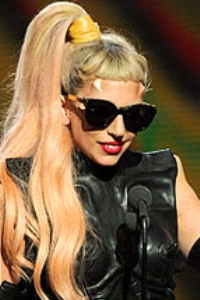 During her performance of Born This Way, Gaga emerged wearing a sheer, flesh-colored latex outfit with pointed shoulder pads and her hair in a long ponytail.

Lady Gaga took to the stage to accept her award for Best Pop Vocal Album for The Fame Monster wearing a black molded outfit and sunglasses.

The singer thanked Whitney Houston, saying that she imagined the R&B legend singing Born This Way.

“I wasn’t secure enough in myself to imagine I was a superstar. So, Whitney, I imagined you were singing Born This Way when I wrote it.”