Lady Antebellum won the big award of the night at the 2011 Grammy Awards. The country trio scored the coveted Album of the Year Grammy, winning over favorites Eminem and Rihanna and Cee-Lo Green. 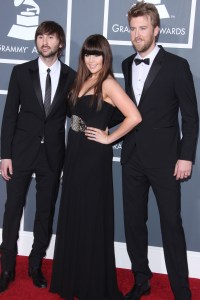 Lady Antebellum’s Need You Now swept the major categories: Record and Song of the Year.

After scoring huge wins at the various country music awards through 2010 and 2011 thus far, Lady Antebellum and Grammy victory should not be a surprise phrase to be uttering this evening.

Lady Antebellum member Charles Kelley was as surprised as anyone backstage at L.A.’s Staples Center after their Grammy night win. “When we wrote it, we didn’t think it was anything special. And who would have known? [The song] is not just about, ‘I’m a little drunk and I need you now,'” Charles said. “It’s a desperation thing.”

Singer Scott returned to the theme of the night for the young country band. Lady Antebellum and their Grammy Award wins were about one thing: Inspiring the band to push their comfort zone in the future. “I think this is just inspiring us to work hard and create great music,” Scott said. “We want to be around for a while.”