Only on the Grammy stage can Eminem and Dr. Dre, two of the world’s best rappers, scratch that, performers, reunite for one huge performance with the lovely Rihanna.

Win, lose, or draw, Eminem is a hip hop icon. The rapper not only took home a couple of Grammy Awards including Rap Album of the Year, he also delivered a history-making performance. 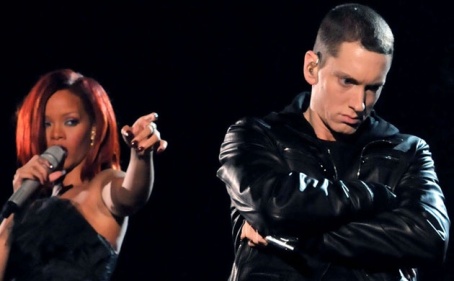 Eminem teamed up with Rihanna and Dr. Dre for an explosive set that garnered a few bleeps and heaps of respect.

Eminem began the collaboration with Rihanna for the second part of the hit song Love the Way You Lie. Reports had been circulating that Rihanna was struggling with her voice due to a nasty illness, but you could not tell. She may have topped her live performance of Love the Way Lie Part 1. Eminem strutted with swagger and brought the house down with a fire that grew over the course of every beat. He can hook you from his first rhyme.

This performance might be on the buzz radar for reasons beyond Rihanna’s scorching duet with the bad boy. It marked the first live television performance by Dr. Dre in ten years. Plus, it was the stage reunion of Dr. Dre and Eminem! The lyrical duo knocked out a brand new track called I Need a Doctor. Despite the fact that there were so many bleeps, it was one of the high points of the evening.

Eminem and Dr. Dre are intense performers. What did you think of Eminem’s collaboration with Rihanna and Dr. Dre?