Justin Bieber’s rise to the top truly is an amazing story and he told that tale on the Grammy stage! Usher joined his young protege on stage to tell the story that included home video footage and insanely stylized dance moves.

Justin Bieber didn’t win a Grammy, but that didn’t stop SheKnows from choosing his performance with Usher and Jaden Smith as a highlight. 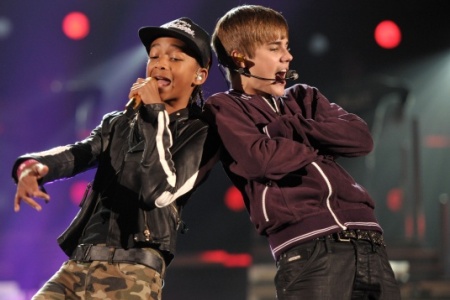 Justin Bieber has earned such a high level of success at a very young age, but it doesn’t mean he’s peaked by any sense of the word. That just might have been the point his Grammy performance was trying to make. His set told a tale of rising and looking to the future.

Usher joined Justin Bieber on stage as home video footage of the youngster played in the background. The two bonded over how they met in a parking lot before Usher left Bieber alone with just his guitar and ace in the hole — Baby. It felt raw and innocent, like Justin Bieber was when he met Usher.

The mood picked up as drummers dressed as weird ninjas stormed the stage. The ninja-drummers introduced Never Say Never — the song not the movie.

Okay, we’re not quite sure if we’ve fallen under a Bieber spell, but he sounded so much more mature. He threw down some sick dance moves too. We’ve been wondering how Jaden Smith would fit into the equation and we couldn’t have dreamed up a better solution. Jaden Smith and Justin Bieber can bust out beats like no one’s business. Smith’s sister Willow might want to watch out for him.

OMG, it’s Usher time! Usher returned to the stage with OMG but he wasn’t alone. The entire stage transformed into a giant dance party! Usher and Justin Bieber danced the pants off of that song and there is no doubt that these two have admiration and love for one another. Our only gripe is it came a bit too early in the show and was over so quickly.

SheKnows chose Justin Bieber’s performance with Usher and Jaden Smith as a Grammy Awards standout for the pure fact that Justin Bieber walks the walk. He lives up to the hype of all the madness going on around him. To be 16 and storm the Grammy stage with a story that young, you deserve props. You don’t have to like him, but you might want to respect him. Check out the video of his performance and see for yourself.