Lady Gaga took her single Born This Way very seriously, arriving to the Grammy Awards in an egg carried by four scantily clad men. The artistic arrival and its relation to the single definitely did not fail in getting the point across — Gaga was born this way, people!

Lady Gaga certainly keeps the masses guessing and we shouldn’t have expected anything less than an arrival via a gigantic egg from the queen of nonconformity. 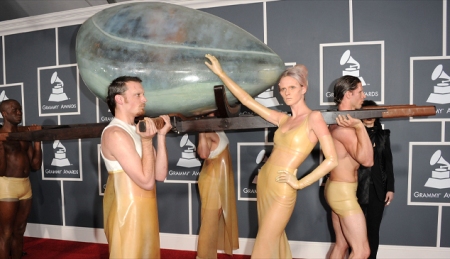 Lady Gaga arrived to the Grammy Awards red carpet with two surprises — not only was she an hour “ahead of schedule,” she made her grand entrance inside a huge egg carried by four men barely wearing any clothes.

You heard completely right and don’t try this with your morning breakfast because only Lady Gaga can make her way down the red carpet inside an egg. Okay, the egg didn’t look exactly like an Eggland’s best egg — it had more of a clear fiberglass look to it — but it was still an egg and still the best entrance ever!

Onlookers including Kelly Osbourne took to Twitter to report the incredible egg arrival. “You will not believe your eyes when you see how @ladygaga showed up to the Grammys.”

Gaga is preparing to perform her single Born This Way for the first time live during the Grammy Award broadcast and according to reports, the egg-mobile is a direct relation to the single.

Lady Gaga even spoke with Ryan Seacrest from the inside of the egg. We’re not quite sure how it happened, but it did.

What do you think was a better choice for Lady Gaga — her MTV Video Music Awards meat dress or the egg that doubles as a house? You be the judge. It doesn’t really matter, they’re both completely Gaga, which means they’re both fabulous!