Arnold Schwarzenegger, the recently retired Governator, told us he’d be back. We were warned. So why are we all surprised that Arnold is returning to acting? 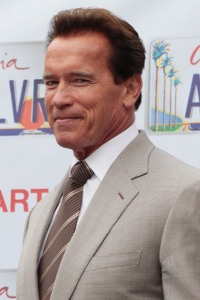 Yes, it’s true. Arnold Schwarzenegger will hit the big screen again soon. At least according to Twitter. This morning he said, “Exciting news. My friends at CAA have been asking me for 7 years when they can take offers seriously. Gave them the green light today.”

Oh good. I’ve missed his acting. (We really do need a sarcasm font, don’t we?) Schwarzenegger recently appeared in Sly Stallone’s The Expendables, but he’s been largely absent from the big screen since getting into government. So here’s the question: Is he going to bulk back up?

In a recent interview, Schwarzenegger said, “Extreme fighting and shooting isn’t possible for me anymore. In the future I’ll need to pick my roles according to my age.”

Alright, well, I’m sure there are going to be plenty of roles out there for 63-year-old former governors with thick accents and overly dyed hair.

So what would you like to see Schwarzenegger in? I’m going to go ahead and say Kindergarten Cop II. Anything would be better than his CGI appearance in Terminator: Salvation, right?