Rihanna has requested her restraining order against Chris Brown be brought down to a level one, only days before the Grammy Awards. Does this mean the couple will see each other at the awards show? 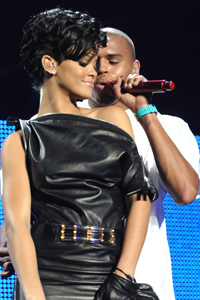 It has been almost two years since Chris Brown pleaded guilty to assaulting Rihanna, after he battered and bruised her the night before she was scheduled to perform at the Grammy Awards. Brown has been on his best behavior, undergoing counseling and participating in community service, and appeared in court two weeks ago to request the restraining order be lifted.

The judge wanted approval from Rihanna before granting that request — and it appears that Rihanna has agreed. Rihanna and her attorney asked for the restraining order to be brought down to a level one, which means that Chris Brown can be in contact with her, but could not harass or annoy her.

Did Brown request the lift on the restraining order so he could attend the Grammy Awards on February 13? Even though he is nominated for Best R&B Performance in a Duo for Take My Time, Best Contemporary R&B Album (Graffiti) and Best Rap-Sung Collaboration (Deuces), his reps told MTV that he is not scheduled to attend. Not only will Rihanna be in attendance, but she will be performing a song with Drake.

Tell us: Do you think Rihanna should have lifted the restraining order against Chris Brown?

Read on for More on chris brown and rihanna