Lost in Translation: Bill Murray was robbed of an Oscar! Robbed, I tell you! Murray and Scarlett Johansson make the most unlikely couple, but it’s one of the most romantic films I’ve ever seen. And what the hell does he whisper to her at the end? No, I’m serious. What does he say? It’s been driving me crazy for years.

A Knight’s Tale: You know how you get your guy to watch a love story? Give him a funny one! I could watch this one over and over…alright fine. I already have. Heath Ledger (sniff) will do anything for love in this anachronistic tale of knights, ladies and jousting. The cast is incredible. Rufus Sewell, Paul Bettany, Alan Tudyk…plus, it’s almost always playing somewhere on cable. 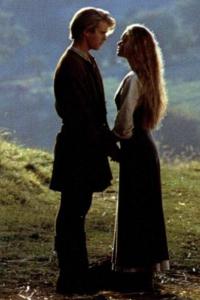 Titanic: Alright, this one is a little chick-flicky, but it’s James Cameron! If you’re not into the love story, you can enjoy the giant ship breaking in half and tons of people sliding into the icy depths. Not only is this one romantic (feel free to mute the Celine Dion song) but it sends the message that a good romance can inspire the rest of your life, even after it’s over.

Lord of the Rings: Oh come on, it’s totally a love story! Aragorn and Arwen, standing on a bridge, the Evenstar necklace…I’m swooning just thinking about it. And the final kiss in The Return of the King…even fantasy nerds can be romantic. Plus I had to throw one in there for my fellow geek brothers and sisters.

The Princess Bride: Robin Wright, Cary Elwes, the line “as you wish” and Andre the Giant. If this movie doesn’t fill you with little hearts and flowers, you have no soul. That is all.