Bad things can happen at conventions. In the new film Cedar Rapids, Ed Helms gets a lesson in all things debauched. Haven’t heard of it yet? We’ll give you all the info.

Cedar Rapids seemingly appeared out of nowhere, didn’t it? All of a sudden, Anne Heche is on The View and commercials are everywhere. The film was a Sundance pick and got so much buzz at the festival that it burst on to the scene with a vengeance. 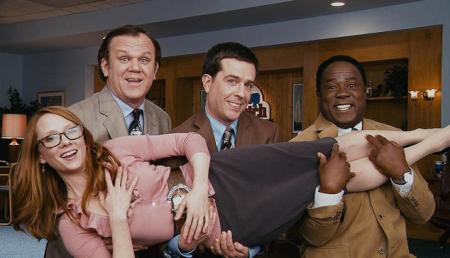 The cast is beyond fantastic — Anne Heche, Stephen Root (who I love in anything) and the brilliant John C. Reilly. Here’s the deal. Poor, naive Tom Lippe (Ed Helms) has never left his little town in Wisconsin. His unappreciative dad (Root) sends him off to represent his insurance company at a convention in Cedar Rapids.

You know what happens at those things. Conventions bring out the worst in people and when Tom falls in with three con veterans (Heche, Reilly and Isiah Whitlock Jr.), he goes on a Hangover-style adventure. Drugs, sex and booze…Tom is partying like a rock star.

For more information on the film and to send a very special Valentine’s Day insurance card, check out Cedar Rapids‘ official site.