Both sets of star-crossed lovers come from families embroiled in a bitter and sometimes deathly feud. The Capulets and Montagues in Gnomeo and Juliet are neighbors in modern day London and as they despise each other, so do their lawn ornaments. The lawns are inhabited on both sides by dozens of lawn gnomes and other assorted garden adornments. When their owners are away, the gnomes continue the neighborly battle. 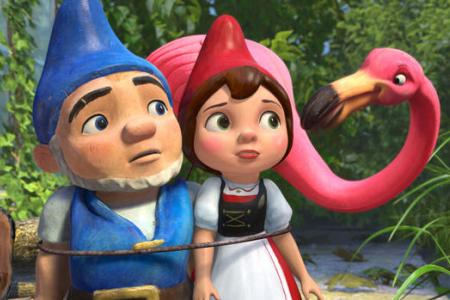 Gnomeo is a Blue Hat gnome while Juliet is her suitor’s sworn enemy, a Red Hat gnome. The pair meets while both attempting to expand their world outside their respective lawns.

Juliet is searching for the perfect flower while Gnomeo is on a mission all his own. When they meet, sparks fly in the cutest of onscreen ways.

Gnomeo and Juliet’s big challenge story-wise is how it will circumvent the inevitable. In Romeo and Juliet, the couple famously doesn’t finish the story very well. The cleverness of Gnomeo and Juliet is showcased in a scene featuring, of all things, a talking William Shakespeare statue voiced with proper panache by Patrick Stewart.

Therein lies another score on the part of Gnomeo and Juliet director Kelly Asbury, his cast. Topping the list are Emily Blunt and James McAvoy as the fateful couple. Portraying other gnomes and garden creatures is a jaw-dropping collection of performers: Michael Caine as Juliet’s father, Maggie Smith as Gnomeo’s mom, plus Jason Statham, Dolly Parton and Ozzy Osbourne as a baby deer. Yes, Ozzy plays a baby deer — brilliant casting on all levels! 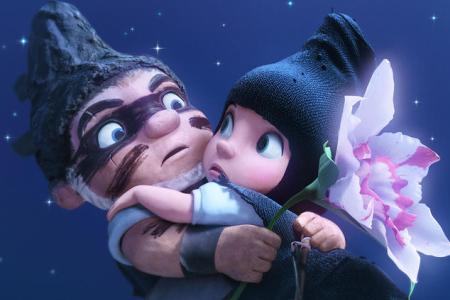 Then there is the music of Elton John. Elton is a producer and music supervisor on the film and has pushed it to the big screen from an idea that first surfaced a decade ago. Elton John provides the soundtrack with a bevy of his biggest hits as well as an astounding new song — a duet with Lady Gaga.

As Elton John is no stranger to kitsch it should hardly be a surprise that Gnomeo and Juliet is loaded with it in the most treasured of means. Whether it’s the pink lawn flamingo character or an adorable frog that doubles as a garden hose spout, the script smartly steers imagery and characterization into a tribute to a unique art form.

Gnomeo and Juliet captures the minutest details of its landscape thanks to a meticulous job by the film’s animators. The sun spots, subtle cracks and even the texture of a garden gnome is present onscreen. It is impressive to see, and yes, especially in 3D.

Much like the Shrek franchise has so successively achieved, the film works on multiple levels for a variety of audiences simultaneously. There are joys for kids and there are little jokes throughout that adults can appreciate.

Out of five stars