Ashlee Simpson left husband Pete Wentz because he is married to his work, says a friend. 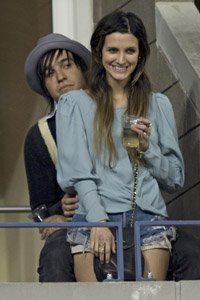 A source close to Ashlee Simpson and Pete Wentz says Ashlee got fed up over Pete’s absentee fathering and decided their marriage was over.

“Ashlee and Pete would argue constantly about him touring,” the insider told RadarOnline.com. “Since she gave birth to Bronx she hated him being away from home and wanted him to stop the band life and work more on producing music, so he could be around to concentrate more on being a husband and father.”

“When Fall Out Boy went on hiatus things were great between them again and it was just like old times, but the next thing you know Pete formed his new band and then he was off touring again.

“I think that Ash has just finally had enough of it. She’s put all her musical aspirations to the side to concentrate on being a mom and it is a big bone of contention with her that Pete just swans off around the world with his buddies like he’s a single guy.”

While Ashlee did have a part in the Melrose Place reboot in 2009, she was reportedly kicked to the curb for her diva behavior and incredibly bad acting. She hasn’t worked since.

“Pete is due to head off again on tour in a couple of months and I honestly think Ashlee filed for divorce as a way to shock him into canceling his plans, or at least modifying them heavily and giving in to her demands to be with her and Bronx.

“It’s a really sad situation because they do genuinely love each other, and I would pretty much swear that neither of them is seeing someone else — but they just want totally different things in life and neither one is willing to compromise.”

Do you think Ashlee’s scare tactic will work? Hasn’t anyone told them that marriage is one giant compromise?