Lindsay Lohan is tweeting her frustrations over her current legal troubles, and is considering a plea deal in her felony case. 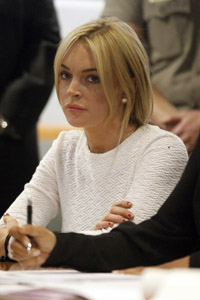 Our second favorite tweeting celebrity (behind Courtney Love) is at it again: Lindsay Lohan is venting her frustration about her newest legal woes on Twitter.

In a mini-rant that sounds alternately wistful and pissed, Lindsay wrote:

“Was on the phone with my sister&this movie Greenberg is on, i heard my voice which was odd- and ryhs ifans is watching Just My Luck in the movie- made me laugh.. i just want to be on set again, and left alone to just work! fyi- i would never steal, in case people are wondering. I was not raised to lie, cheat, or steal… also, what i wear to court shouldnt be front page news. it’s just absurd. god bless xox L”

The problem with this statement? She has, in fact, lied and stolen in the past. She lied repeatedly about her drug and alcohol use and was accused of stealing thousands of dollars worth of clothes from both a friend and a photoshoot, plus was the key suspect when $500,000 worth of jewels went missing from an Elle photoshoot.

Maybe she thinks it doesn’t count if her addiction made her do it?

Meanwhile, while Lindsay Lohan maintains her innocence in the felony theft case, her lawyer says she is open to a plea deal if no jail time is involved.

“Ms. Lohan maintains her innocence, and now that I’ve seen the police reports, I believe the case is entirely defensible,” Shawn Chapman Holley told CNN. “Having said that, we will entertain a discussion concerning a plea if it means no jail so that she can move forward with her recovery and her career.”

Lindsay’s next hearing is scheduled for February 23.