Tonight on Private Practice: Blind Love, Charlotte’s attacker checks into the hospital, Susan’s health takes a bad turn and Pete and Amelia try to help an army vet. Meanwhile, Audra McDonald announces this is her last season as a Private Practice regular.

Charlotte’s attacker, Lee Henry (Nicholas Brendan), arrives at St. Ambrose Hospital in critical condition after being stabbed by his girlfriend, leaving Charlotte reasonably conflicted. Sam is the doctor on the case and he can relate, since he faced the same conflict when the drunk driver who killed Dell and hurt his daughter showed up in the ER on Private Practice. 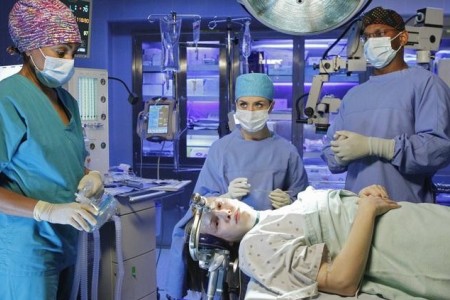 Sam reminds Charlotte that letting someone die isn’t right, even if he “deserves it,” but if that’s what Charlotte wants, he might just do it.

Susan takes a terrible turn. Addison (Kate Walsh) and Dr. Rodriguez (Cristian de la Fuente) save the day, but Addie’s new stepmom still doesn’t have much time. Sick of the doctors and tubes, she refuses any more drugs, while Addison’s mother, Bizzy, begs Addison to do everything in her power to help. This leaves Addison with a tough choice and her decision is not likely to please her mom — but what does?

With all this tension, Amelia faces a much easier choice. Pete catches her rushing off to the neurology department monthly roundtable and offers her a perfect way out. He wants her to check out his patient, Lizzie, an army vet from Afghanistan with shrapnel in her brain. She immediately drops the “dorkfest” meeting to see if she can help the vet get her sight back.

Meanwhile, in behind the scenes news, Audra McDonald revealed she won’t be returning as a Private Practice series-regular next season, though we may still get visits from Addison’s BFF Naomi.

“I have spent four amazing years working with the best cast and crew on television,” Audra McDonald told TVLine. “Though I am stepping away from the series as a regular in order to spend more time in New York with my family, I am not closing the door on Private Practice or the character, Naomi. I am beyond grateful to Shonda Rhimes, ABC and the team behind the show.”

Rhimes made it clear there are no hard feelings, saying, “We are so appreciative of Audra and her talents and look forward to having her return to Private Practice as often as possible. Audra has been a bicoastal commuter throughout our four seasons on the air, and, ultimately, we respect and appreciate her desire to spend more time with family in New York.”

Considering how Naomi’s storyline has gone over the last year, it shouldn’t be hard to accommodate her exit or her return visits.