A judge signed off on the divorce of Kelsey Grammer and Camille Grammer, which will allow him to marry his new girlfriend this month. 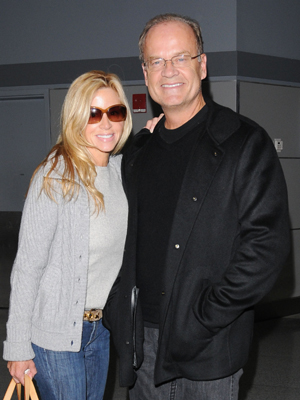 An L.A. judge signed the divorce decree of Kelsey Grammer, 55,  and Camille Grammer — freeing him up to marry his 29-year-old girlfriend Kayte Walsh at the end of this month.

The former Frasier star had to post $2.3 million to protect Camille’s pension rights against any new spouse, but they will work at the property settlement issues at a later time.

Camille, who appeared in Real Housewives of Beverly Hills, released the following statement:

“I have a great many mixed feelings about today — I’m sad for what was, yet excited about the road ahead. I’m grateful to my family and friends who have stood by me through this time — I will never forget their love and support. What I most hope is that Kelsey and I can improve our communications and truly co-parent our two wonderful children; and I wish Kelsey and Kayte love and happiness in their new marriage.”

Camille rejected Kelsey’s initial divorce settlement of $30 million in December saying it didn’t include alimony or child support for their kids, nine-year-old Mason and six-year-old Jude. Stay tuned for how much Camille will get in the divorce as they hash out those details in the upcoming months. Kelsey is said to be worth around $85 million.

Kelsey will marry Kayte, who miscarried their child together back in October, at the end of this month. She will be Kelsey’s fourth (and hopefully last) wife.