Dr. Drew said the last thing Lindsay Lohan needs at this vulnerable point in her sobriety is her new legal troubles — and Lindsay buried the hatchet and thanked him for his support. 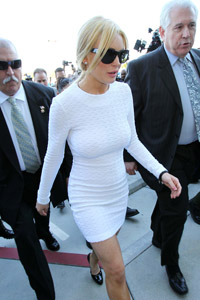 Dr. Drew fell out with Lindsay Lohan last year when he told the press, “If she were my daughter, I would pack her car full with illegal substances, send her on her way, call the police, and make sure she was arrested.”

Lindsay did not appreciate that and called the Celebrity Rehab star a “loser” and a “fake doctor.”

Now that Lindsay appears to be serious about her sobriety, Dr. Drew is speaking out in support of her, and it’s obvious he believes she’s innocent of the felony theft charges she’s facing.

“I am mortified how @Lindsaylohan is getting attacked when she is so fragile and just establishing her sobriety. Not at all what she needs,” Dr. Drew posted on his Twitter account following Lohan’s arraignment for felony grand theft charges at a Los Angeles courthouse.

When Lindsay was made aware of the tweet, she wrote back, “@drdrew thank you for your support. I appreciate it.”

Dr. Drew says the fact that Lindsay publicly expressed her appreciation speaks volumes about this new sober place she’s in.

“Many of my patients look at me the way Lindsay might have when they are in the throes of their addiction. When they are in recovery, they begin to understand what I was saying, and why I was saying it,” Dr. Drew told RadarOnline.

“This [the Twitter post] is further evidence that Lindsay is in recovery, and Lindsay should continue to be supported. I wish her all the best.”