Hey America, you know how you get revenge for all those Brits playing our superheroes? Cast Meryl Streep as former British Prime Minister Margaret Thatcher! Streep has just completed her first week of filming on The Iron Lady. We’ll give you the details. 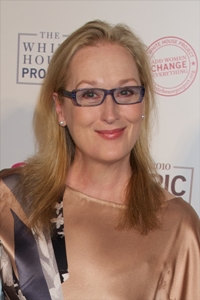 So, you think all the angry blog posts about Brits playing Superman and Spider-Man are right on the money? Well, wait until you read the ones about American acting legend Meryl Streep’s new movie. She’s just completed her first week of shooting The Iron Lady.

The film is the story of former British Prime Minister Margaret Thatcher and apparently it doesn’t show her in a flattering light. According to The Daily Mail, the film portrays the Baroness as a woman looking back with sadness on the decisions she made as the leader of the country. In fact, she’s accompanied by the ghost of her late husband, Sir Denis Thatcher.

If you do a little searching on the Internet, you’ll get a taste of what our buddies across the pond think of this…and it’s not very positive.

Whatever you think of her politics, you have to remember that the woman broke the gender barrier. It doesn’t help that the film is being directed by Phyllida Lloyd, who last worked with Meryl Streep on the musical Mamma Mia! You remember that one, right? With all the non-singers howling out ABBA songs?

Reports say that after concern from the Thatcher family, the script has been toned down a bit, but it’s still getting a lot of flack. So what do you think abut Meryl playing Maggie? Let us know your thoughts. The film is set for an end of the year release.