Miley Cyrus is opening up to Marie Claire on her salvia bong scandal and her parents’ divorce. 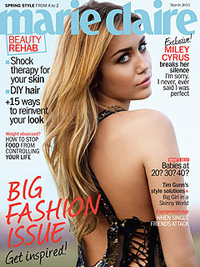 From her infamous smoking salvia in a bong scandal to her racy music videos and multiple tattoos, Miley Cyrus has been fodder for the gossip magazines. The 18-year-old Hannah Montana star is speaking out in the March issue of Marie Claire, on stands February 15.

Cyrus was caught on camera smoking from a bong that contained salvia, a natural herb that is legal in California, but does have hallucinogenic effects. “I’m having a little bit of a bad trip,” she said and laughed to the camera.

“I want more of that (expletive)!” she added.

When asked by Marie Claire if she feels unfairly judged for the scandal, Miley Cyrus said she should have known better. “But they’re not Miley Cyrus. They’re not role models. So for me it was a bad decision, because of my fans and because of what I stand for.”

She also talks about the divorce of her parents, Tish and Billy Ray Cyrus, who have been married for 17 years. “Of course anyone is going to be upset when there are troubles in their family,” she said. “But I have a lot of hope in our family and no matter what happens, we’re gonna stay strong.”