Lindsay Lohan said she has witnesses who can prove she did not steal a necklace from a Venice, California jewelry store. 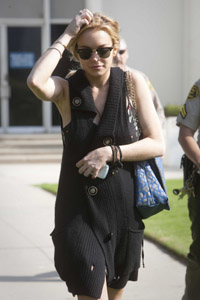 Lindsay Lohan stands accused of a felony theft charge for allegedly shoplifting a $2,500 gold necklace from a Venice, California jewelry store, but the star insists she is innocent — and says she has witnesses to back up her story.

An insider told RadarOnline, “There were two witnesses with Lindsay in the store who are going to tell her side of the story.”

“Her assistant Eleanor and her friend Patrick were with her and they saw everything and they both know that Lindsay didn’t steal the necklace.”

In fact, the source says that the store owner said Lindsay could take the necklace in exchange for some name-dropping and publicity, and got angry when that didn’t happen — so she made it happen by making up an accusation of theft.

Lindsay is absolutely adamant she did not steal the necklace and will enter a not guilty plea at her arraignment.

“She didn’t steal the necklace and her eyewitnesses will tell the truth,” said the source.