Jude Law and Sienna Miller have split up again. 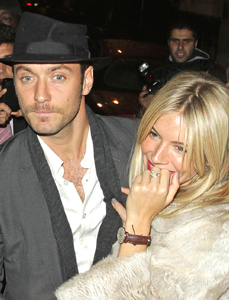 Actors Jude Law and Sienna Miller have had an on-again, off-again relationship for years, and the couple has called it quits yet again.

A rep for the pair confirmed the breakup.

“I can confirm that Jude Law and Sienna Miller are no longer in a relationship,” the rep said.

The couple got engaged during Christmas 2004, but split in 2006 when Jude was busted gettin’ it on with the nanny of his two kids — incidentally giving us the best celebrity mistress quote of all time in reference to their tryst on a pool table: “Balls flew everywhere!”

They reunited again in 2009, but after a year and a half — and a heck of a deceptive Christmas gift — the pair has parted ways.

“It is mutual and amicable and they are still friends,” a friend of the pair told People.

“It was an entirely an end-of-the relationship decision,” the friend said. “It had run its course.”

Well ladies, time to lock up your husbands.