Super Bowl MVP Aaron Rodgers stopped by The Late Show with David Letterman and the Green Bay Packers’ cutie quarterback dished his team. Tack on rumors of a romance with Jessica Szohr and he’s certainly got a lot to smile about!

After running about 60 plays, throwing 304 yards and scoring three touchdowns for the Super Bowl XLV win on Sunday, February 6, 2011; Aaron Rodgers spent Monday running around some more. This time, however, the quarterback wasn’t calling Super Bowl plays: He was riding in a Disney World float and receiving pats on the back for the big Green Bay win and his own MVP title. 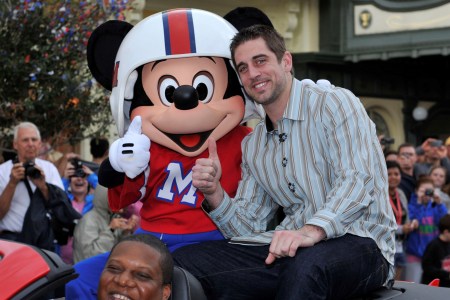 Rodgers’ busy Monday didn’t, however, keep him from stopping in on David Letterman in New York. “This is fun for me,” Rodgers told Letterman. “I watch your show a lot. It’s good to be here.”

The Packers QB is getting mixed reviews for his comments about coach Kevin Greene’s propensity to reuse plays that work well and being “a little worried about special teams. Every time we kick off, I kind of hold my breath.”

Rodgers was also quick to admit to sharing leadership responsibilities with Packers cornerback, Charles Woodson. Woodson, who was the 2009 NFL?Defensive Player of the Year, had to bow out of the Super Bowl XLV action after suffering an injury early in the game, but was there to keep team spirit up with a locker-room pep talk.

“I do have to be one of the leaders, but I think it takes multiple leaders to have a locker room that functions properly, and thankfully a guy like Charles comes in with his reputation and his experience and with the way he plays, and he’s got instant credibility with the guys,” Rodgers told Letterman. “He’s taken on more of a speaking role this year in the locker room and me, I’m more of a leader by example.”

Letterman also gave Rodgers a shiny new WWE World Championship professional wrestling spinner belt (in honor of Greene, who wrestled alongside Ric Flair in WCW in the ’90s), and word is, everyone on the team is going to get one.

Rodgers and Szohr have been spotted together a few times and Szohr showed her Packers support by attending the Super Bowl in Dallas this weekend, but dodged the romance rumors by pointing out she’s a fan from Green Bay. Post-Super Bowl reports have Rodgers and Szohr working the after-party together, but now denials are surfacing.

Szohr’s rep admits the two have been hanging out, but told Gossip Cop, “They are not dating.”