The Biggest Loser trainer Jillian Michaels reveals she is currently in the adoption process to welcome a child from Africa. 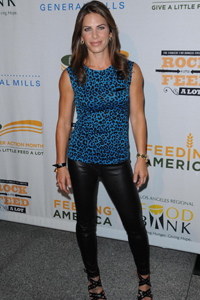 Tough-talking trainer Jillian Michaels of The Biggest Loser is showing her softer side as she gears up to leave her weight-loss show to focus on starting a family.

“I want to start a family,” Michaels said in an interview with Access Hollywood. “I’d like to take a year off of television and really focus on — I’m in the middle of the adoption process — and really focus on that and hopefully becoming a mother in the next year and putting all my energy into that for awhile. And then back to TV later in 2012.”

Jillian Michaels said she is in the process of adopting a child from Africa, but admits it is “an incredible undertaking.” She recently talked about the steps she is going through to start her family:

“I’ve completed all of my paperwork; I’ve had all my physicals; I’ve been checked by the FBI — you have no idea! Now I wait for a referral. That could be anywhere from six months to a year. I’m in a pilot program for the Democratic Republic of Congo so we’ll see.”

Michaels has endometriosis and polycystic ovaries and has said that fertility would be a problem for her, but says that her clock is ticking and she can’t wait to be a mom. “I’m 36! Do you hear the clock? It doesn’t matter!” she said, explaining that she doesn’t care if her adopted child is a boy or a girl. “As long as there’s a little teeny person with me, I’ll be good.”

Read on for more Jillian Michaels