It looks like Lindsay Lohan is going to be charged with grand theft Tuesday, according to TMZ. Will she go to jail tomorrow?

Things aren’t looking too good for Lindsay Lohan. TMZ is reporting that the troubled starlet will be charged with felony grand theft Tuesday for the alleged theft of a $2,500 necklace from a boutique jewelry store in Venice, Calif. 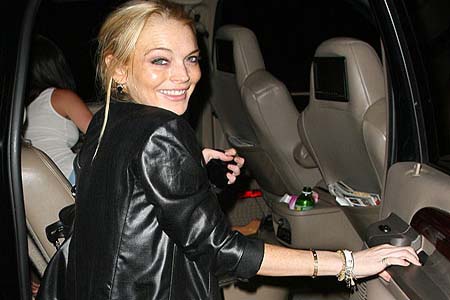 The actress will be arraigned at 1:30 pm PST Wednesday, according to TMZ. Multiple sources have reported that she will face up to three years in prison if she’s convicted of the theft.

The whole thing started after Kamofie & Co. reported the custom necklace stolen on Jan. 22, according to the Associated Press. The store — located close to Lohan’s post-rehab apartment — reported Lohan as the likely cuprit after she was spotted wearing the necklace in photographs.

Officials ordered a search warrant for Lohan’s apartment — but the necklace was returned before police could search her pad.

Lohan maintains that she did not steal the necklace — she claims it was given to her on loan. The store continues to maintain that it was stolen. We’re not about to assume that Lohan stole the necklace, but she has been accused of theft before.

Her prior theft allegations — matched with her current probation — spells trouble for Lohan. Judge Eldon Fox has said previously he will revoke Lohan’s probation if she violates it – and revoked probation might mean immediate jail?

Will she go to jail tomorrow? Stick with SheKnows for all the latest details on Lindsay Lohan’s court appearance.