Legend, icon, Oscar-winner, Grammy-winner, Tony Award-winner, pop culture institution and now Sir Elton John can add movie executive producer to his list of titles as Gnomeo and Juliet hits theaters. Elton John not only provided his songbook for the soundtrack, wrote and performed a new track with Lady Gaga, but also is largely credited with being the reason Gnomeo and Juliet is even premiering at all.

The film has been on John’s radar for over a decade and it was his tenacious passion for the project that got the movie made. Besides, with newborn Zachary in the house, new father Elton wanted a movie his son would fancy. 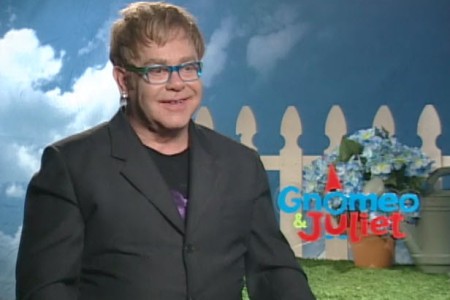 When a star has sold over a quarter of a billion records and had over 50 Top 40 hits, they rightfully possess a certain amount of clout that can be tossed around. Not one to push his own agenda except when it saves lives as he does with his numerous charities, Elton John felt deeply that Shakespeare’s classic story of Romeo and Juliet would make a terrific animated film set in the world of garden gnomes.

With one phone call to a Disney studio executive expressing that love for Gnomeo, the production went from stalled to sizzling. 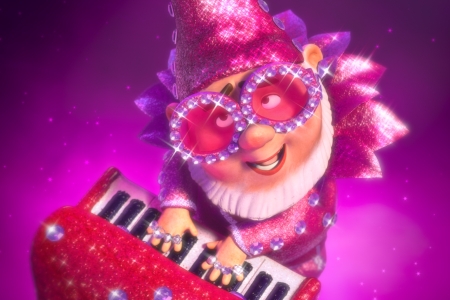 Elton John sat down for an exclusive video interview and shared what it was about Gnomeo and Juliet that had him so passionate. He admitted perhaps part of the passion arose from his being a new father, but more importantly, it was the story and how his hits would provide a stellar soundtrack to the film that stars Emily Blunt, James McAvoy, Michael Caine and a bevy of other huge stars.

With his writing partner Bernie Taupin, Elton John’s hit list is remarkable and many of the songwriting duo’s songs are featured, pushing the storyline in Gnomeo and Juliet. The movie isn’t the first foray into the film world for Elton John. He won an Oscar for his work on The Lion King and was the artistic force behind bringing the film Billy Elliott to Broadway.

It is with great honor that we present our exclusive video interview with one of music history’s biggest stars, Sir Elton John.