In our latest Chicken Soup for the Soul exclusive excerpt, we take a closer look at Family Matters. 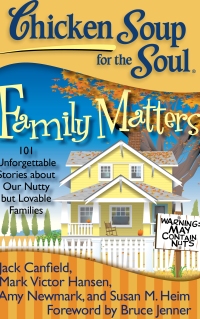 Month after month, Chicken Soup for the Soul has delighted SheKnows readers with our exclusive excerpts for the iconic series’ inspirational tales.

The famous book series’ latest, Chicken Soup for the Soul: Family Matters, is out now! Our exclusive this month comes from Eden Arneau and is entitled, Huggy Bear vs. the Iceberg.

Chicken Soup for the Soul: exclusive

My favorite movie line is from Dirty Dancing. Johnny is trying to get Baby into shape for their big performance. Baby, falling for handsome Johnny and his moves, keeps trying to wrap her arms around him. Johnny finally shoves Baby away and says, while drawing an air bubble around each of them with his hands, “This is my dance space. This is your dance space.”

I feel like that about the world. We would get along fine and move in greater harmony if others would stay in their own dance space and out of mine.

Imagine then, if you will, the first time I went home to meet my boyfriend’s parents. My boyfriend, well, was a guy. He shared pertinent details like: They keep the soda on the back porch, and be careful if you use the upstairs toilet because it clogs. Um, thanks. So I was flying blind when the door opened and I was enveloped by a continent of woman. By the time I realized what was happening; my nose was pressed between two enormous breasts.

Once this enthusiastic embrace was severed, I tried to duck away, but this woman had morphed into a multi-armed sea witch determined to keep touching me continually. An arm linked through mine, a hand on my shoulder, fingers on my back. I might have been more mentally prepared to handle these exchanges (and worn the body armor I keep on hand for just such an occasion) had my boyfriend warned me that his mother had earned herself the nickname “Huggy Bear.”

I scanned the room for escape routes. Back out the front door? Could be a long weekend locked in the car. Into the kitchen? It’s a pretty small space with lots of hot and sharp things. Dining room? Glass front china cabinet filled with breakables. Shaking my head in frustration, my bladder supplied the answer.

“May I use your bathroom?”

This particular water closet had a pocket door that, when pulled, divided the sink and shower from the toilet. Unable to rid myself of hurricane Huggy Bear, I began to ease the divider closed. H.B.’s pair of prominent features hovered at the edge of the door as it slid across the entryway. My resolve and my bladder were set, however. I was closing the door, even if it meant giving her an extraneous mammogram.

I could hear her going on about shampoo and hot water, and thanked God for my brave bladder. By the time the flush, whoosh and fill of the tank had finished, the other half of the room was quiet and blissfully empty. I breathed a sigh of relief, locked the door that led to the hallway, and wondered how long I could wash my hands before a locksmith came to remove the door. My arms and back still crawled with radiating imprints where fingers and arms had pressed my flesh. A wave of goose bumps at the thought fluffed my arm hair and eased their impact. I was evaluating the wisdom of spending the weekend in the bathroom. After all, one only needed water to live, and I was sure at least one of the rainbow bottles of fruity body wash in the tub was edible.

Lest you think I was one of those children raised in a dog crate now shunning human contact, I will tell you that I appreciate a brief “nice to see you hug” from a friend or a firm, dry handshake. I’m English, after all, and we — as I once heard it so aptly put — only show affection to horses and dogs.

I could hear voices in the kitchen, mingled with the sounds of pots and pans crashing together, and hoped that Huggy Bear now had five or six of her hands filled. Slinking from the bathroom, I came around the corner to the kitchen, straight into the waiting embrace of a second and third Huggy Bear offspring — my boyfriend’s siblings, who had their mother’s penchant for touching and her affinity for dessert. Sausage fingers squeezed my shoulders, patted my arms, and sent me into a minor panic attack as my boyfriend smirked at me. His hands were preparing supper, leaving his brother, sister and mother free to molest me.

The rest of the weekend became a bizarre version of The Fugitive. I chewed through satin handcuffs, changed my appearance, and crawled through sewers to steer clear of the many-armed woman. With true Tommy Lee Jones tenacity, she pawed through every car trunk, steamer trunk, swim trunk and tree trunk to keep me within an easy grab.

By the time we packed up and headed back to work on Sunday evening, I was exhausted. Physically and mentally, my space had been invaded, and I needed a week in my sensory deprivation chamber.

That boyfriend became my husband. Huggy Bear and her cubs became my in-laws, and my children have now taken up the mission of shattering my private dance bubble — their pure-blooded Swedish genes having taken over their affection centers. It was bad enough sharing my body with them for nine months. Now I’ve taken to storing the two adorable monsters in resealable containers so I can go to the bathroom or cook a meal without one or both of them grabbing or pinching parts of me.

They get along swimmingly with Huggy Bear. And while she lavishes them with embraces, I am released from the ritual. And Huggy Bear now seems content, if not happy, to wave to this Iceberg from across the room.